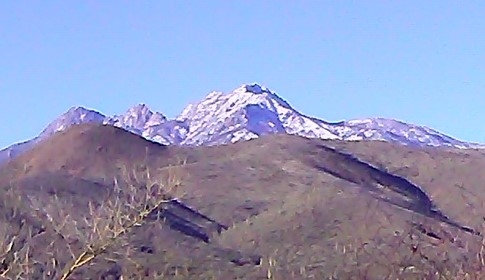 In early January we had our first winter camping adventure, and went on another one in early February, this time to one of our favorite spots, lovely and grand Roosevelt Lake north and east of Scottsdale, Arizona. The ride up was memorable because of the transformation of the desert, due to winter rains, since the last time we were there in October. The vegetation had become much greener. The majestic saguaro cactus were a lighter green color and swollen from drawing in all the available moisture–preparing for the dry season that is sure to come.

The other change was the snow visible on the mountains west of Roosevelt Lake. This is a beautiful, usually annual, sight that lasts just a few weeks after the infrequent snowstorms. We were equipped for winter camp, but perhaps not mentally prepared. The tent got very cold at night and we had to wear our stocking caps and gloves when we got up and until about 9:30 in the morning.

There was even frost on the roof of our SUV in the morning. 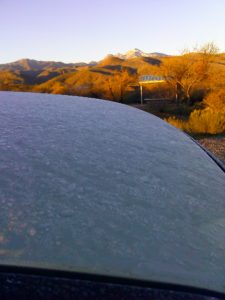 It’s a challenge to make the morning coffee on the camp stove when your hands feel frozen. The evening meal is a challenge as well because this time of year night still falls so early. You have to hustle to prepare dinner, eat dinner and get the camp “kitchen” cleaned up before it gets dark. This was particularly true since we decided to cook some meals over the firepit rather than on the propane stove. We had to get the fire started at 3:30 in the afternoon to have the coals ready in time.

I’ve blogged before about some of the characters we’ve encountered at campgrounds. There was no shortage this time. The first morning I walked up to the bathroom I passed a fellow who was sleeping on the ground, in a sleeping bag. Apparently he arrived in the middle of the night. He had this vintage truck stuffed with apparently all his worldly possessions. When I walked back he was up and having his morning coffee. He closely resembled the “Grizzly Adams” character that was on TV years ago, with perhaps a little of the “old desert prospector” thrown in. I greeted him, in my best “westerner” voice with, “Mighty cold this mornin’, isn’t it?”

He responded by pointing up the snowy mountain peaks and said, “You should have been camping up there last night…” Apparently that where he came from. Now’s that a true winter camper.

Character #2 popped over to introduce himself shortly after we finished breakfast. He invited us to come over to his camp for a beer at 4:00. So we did. The next day he suggested we start cocktail hour at 3:30. If we had stayed another week, we might have been starting around noon.

A great thing about campers is that they cheerfully share information about routes and campgrounds for planning future trips. We are planning to go to the Texas Gulf Coast in a few weeks. As luck would have it, this fellow had just been there so he gave us a complete route itinerary for the trip over there. It’s one thing to read about a campground on the Internet. It is another to get a first-hand account from someone who was just there. He didn’t have to spend time helping us, but he was glad to do it.

I’ve noticed at many of these campgrounds that guys tend to identify themselves by the type of “rig” (RV or trailer) they have, such as “I’m in the Jayflight 23-footer on the corner.” They usually mention how large their rig is, in length. Apparently size matters, in the world of the camping enthusiast. We can’t really compete in this friendly competition, though. It’s not quite as impressive to say, “We’re in the blue-gray ten person tent.”

I really enjoy having my dogs Rose the Irish Setter and Kate the Springer Spaniel with us when we camp. They are extremely well behaved and are up for any adventure–hiking, swimming, exploring. Where we live for some reason there aren’t many other Irish Setters around. So it was a great thrill when we went out walking and met a woman with another Irish, a big boy named Ian. And in the “it’s a small world” department, we had met this woman 12 years ago when we stayed at a cabin she owns up in the mountains. Her Irish Setter at that time had recently died and she talked about hoping to find another wonderful Setter companion someday. And so she did, and we got to say hello to him.

We spent the rest of the day sitting by the lake, reading, and enjoying the awesome views. 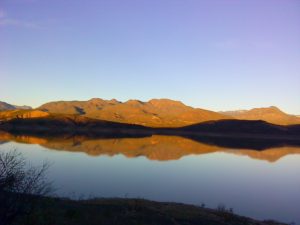 The next day would be one of the most traumatic we had during our camping adventures. As we went for our morning walk on the campground road, our Springer Spaniel Kate was attacked by a pit bull–a huge brindle colored one that broke off his collar, sprinted out of his owners’ campsite about charged after Kate and Rose. The snarling dog knocked Kate over, then knocked Dee over onto the pavement, then turned its head around–it had enormous jaws–and tried to bite Kate on the neck. It was frightening to see the anger and aggression in that dog’s eyes. I had to give the pit bull a swift kick to get it off of Kate. Luckily the dog was not able to lock its teeth onto Kate–or us. The dog’s owner came running into the street to pull his dog away from us. He kind of, sort of, apologized.

Kate, for her part, was more stunned than anything else. Perhaps she was thinking, “Mr. Big Ass pit bull, how dare you try to hurt me! I’m friends with Shorty Rossi.” Kate had met Shorty, the “Pit Boss” himself, a couple of years ago at a Pet Expo event in Phoenix. 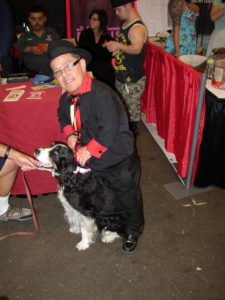 That night Kate seemed so traumatized by the situation that she slept between us in the tent, with her head on our pillows, all night. We felt very blessed that we had avoided a potentially heartbreaking end to this fun camping trip. Later that day, we heard that same dog snarling at other people who were out walking. Luckily the dog and his owners left the campground the next day. Dee’s knee injury was painful and she had to take it easy the rest of the day.

One thing I’ve seen over and over while camping is that many campers have respect for the campgrounds. One fellow whose campsite was near ours set off every morning and spent an hour picking up trash along the lake left by thoughtless, slob campers. What a nice thing to do! Leave your campground cleaner than you found it.

The best $70 I’ve spent this winter was on a Little Buddy propane heater that is safe for use inside the tent. On really cold mornings it was wonderful to turn it on and chase the chill away. It’s not that it makes the tent 75 degrees or anything like that but it raises the temperature sufficiently to make getting up and going more comfortable.

The last day we were running out of supplies but it was still very cold and we needed a hot breakfast to get going. We improvised a peanut butter and jelly sandwich grilled on our camp stove. It was delicious and will now be a staple of our camping menu in the future.

I really enjoy bringing a eclectic pile of books to read when we are out in the “wilderness”. It can be a relief to not have television to rely on for entertainment for a few weeks at a time. Sure, we have Internet access, but we try to use that sparingly because the data charges are rather high. This time one of the books I brought was by Zane Grey, particularly known for his western stories. He had a gift for his wonderful scenic descriptions–vivid and colorful.

A portion of this story happened to take place in Tonto Basin, Arizona–where we were camping! It was great fun to lie in bed reading the book and imagining we’re there in the early part of the 20th Century, when Zane Grey wrote his stories. He often writes about the emotional impact of coming out west on people from back east, how the land and the people shape their character. Having spent a lot of time in the wilderness in the last year, I am beginning to understand what he means. The novel I read is titled, “Dorn of the Mountains.” 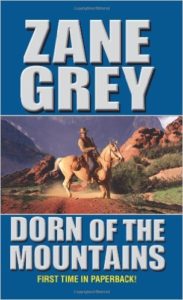 Thankfully, the weather is beginning to warm up a bit as we say goodbye to February and say farewell to winter camping. We’ve coped with cold temperatures as best we could, but there’s not much you can do to protect yourself from cold when you are in a tent. I for one am ready for Spring! The days are beginning to seem noticeably longer so there won’t be any more dinners at 5 in the afternoon. As I mentioned, in March we are going on a longer tent camping adventure, starting in Arizona and going all the way to the Texas Gulf Coast.

Rose had been working hard planning the trip. I think she’s ready to go to a warm beach. 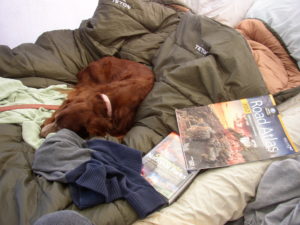 Can’t wait to get started…

← Sleeping On a Cloud On the Road, Reading and Writing →