Home » The Silence of the Night in the Desert?

The Silence of the Night in the Desert? 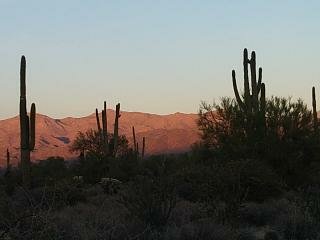 Not really. You’d think being miles out in the desert would be complete silence at night. No traffic. No music. Not heater or air conditioner. We usually camp in a tents only campground or loop so no generators from the RVs.

Last night we were woken by two owls hooting to each other, I couldn’t tell if they were staking out territories, mating calls or just letting each other know they were there. The most common species in the desert is the great horned owl, so I’m guessing that’s what they were.

Coyotes are almost a nightly occurrence or at least every few nights. Of course they howl, but there’s also chittering, yips, playful barks and a sort of yodel. Most of the time their conversations are in the distance but sometimes it sounds like they’re just down the trail.

We see javelinas more than we hear them. They scrounge around for food at dusk and dawn. But occasionally they’ll stay up late. You can hear them snorting and pawing in the dirt for grubs. The drifts – that’s what you call a group of javelinas – are females, babies, and juveniles, no adult males. Javelinas can’t see well so their first instinct is to charge. And they’re not afraid of humans or dogs for that matter. They also do not necessarily get along with each other. You’ll hear growls, grunts, and chuffing when they argue.

Dee
Note To Self: Always check the tent zipper before going to bed.

bhanddp January 17, 2018 Hitting the Road Comments Off on The Silence of the Night in the Desert?