Home » The Majestic Redwoods! and a Refreshing River

The Majestic Redwoods! and a Refreshing River 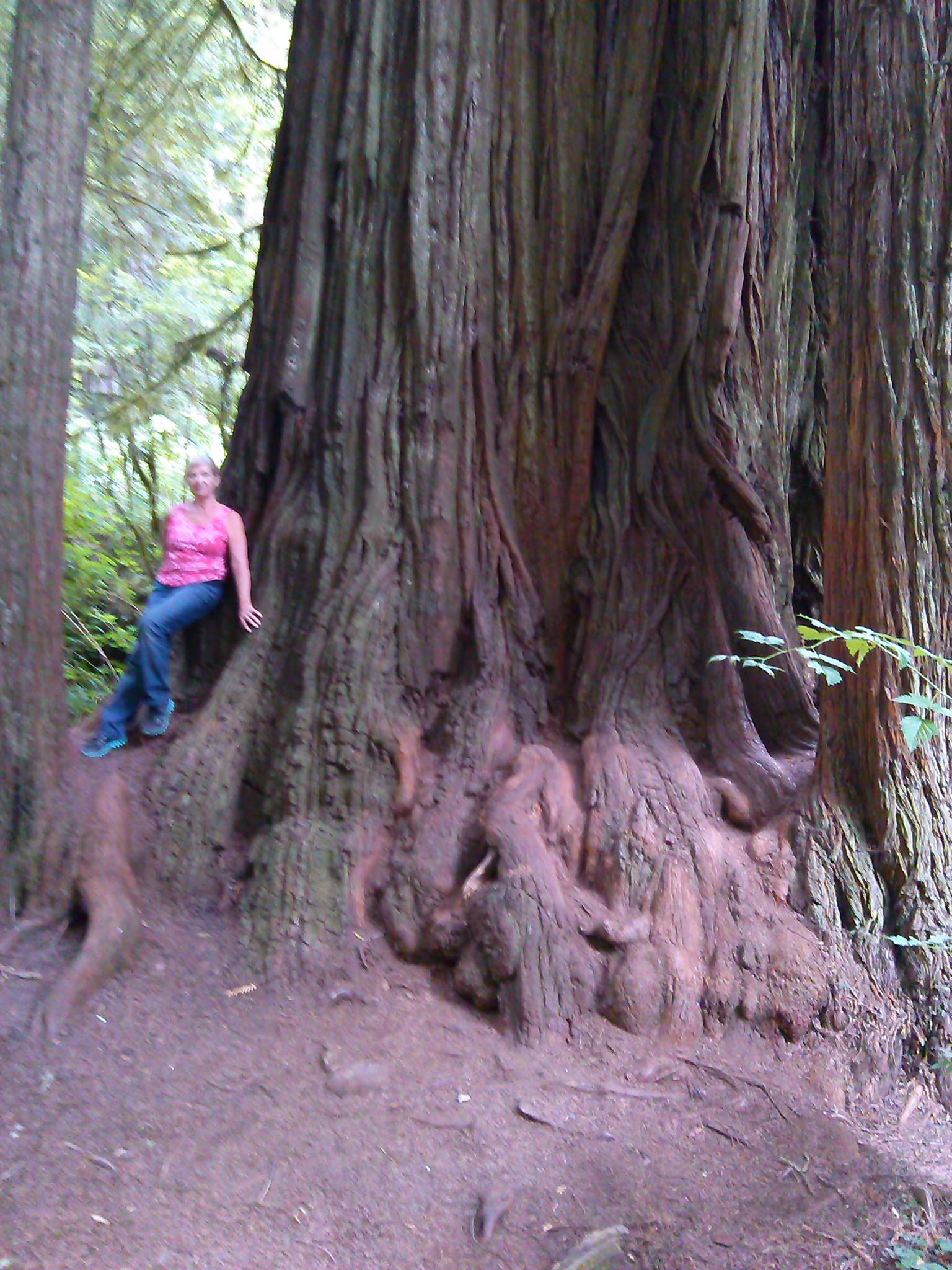 Our next stop was almost at the top of California, and we got the thrill of driving through immense, mist-shrouded redwood forests. The trees were colossal in width and height, and the forest floor was cool and green, almost prehistoric looking. I half expected to see a Brachiosaurus poking its neck out from the top of the trees. 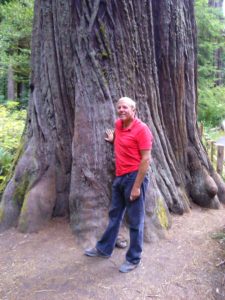 I should mention that the San Francisco area traffic didn’t really thin out that much until we were north of Santa Rosa (north of the Napa/Sonoma wine country). As we headed up the coastline, it seemed this leg of our trip was taking much longer than we thought it would, given the modest distance we were covering relative to the other parts of our journey. The reason was that Highway 101 runs through a number of smallish towns where the speed limit drops all the way down to 35 miles per hour and ends up being even slower because of the traffic.

We were headed for a campground named Panther Flats. I liked that sound of that–“flats”. Not Panther Mountain, Panther Peak, Panther Summit. By this time we were so tired of negotiating curvy mountain roads, we were really hoping for an easy drive. Our last stop before heading back inland toward the camp was the town of Crescent City. Our food supplies were running low so we were excited to see there was a Safeway grocery store there. That’s the store we shop at in Scottsdale, AZ where we live, so it was like a little piece of home.

Now resupplied, we traveled up through the Redwood trees until we reached our camp, Panther Flats. Overall, it turned out to be an easy drive. After some of the rough spots we encountered with other campgrounds, this one impressed us from the minute we arrived. The sites were all tucked into the tall trees, insuring privacy. 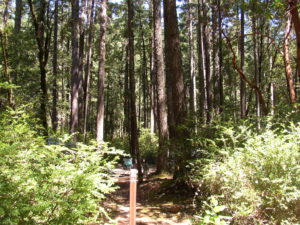 Can You Spot the Springer Spaniel?

The wonderful, fresh smell of the trees filled the air as we parked our SUV and set up camp. The camp had really clean bathrooms and showers, which was nice because our next stop, a campground on the beaches of Oregon, did not have shower facilities. Immediately upon arrival at Panther Flats you notice the soothing sound of rushing water. A short walk down a hill revealed a sparkling, energetic river, the Smith River, complete with rapids. 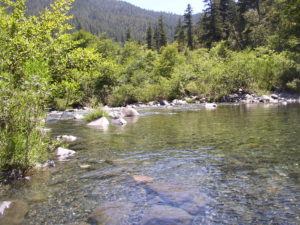 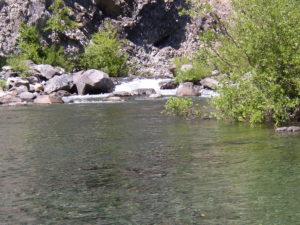 Tucked away was a beach with soft sand. We all (Rose and Kate included) enjoyed swimming in the river. The weather was warm enough that the cool water felt great, particularly on the mosquito bites on my feet I acquired at Clear Lake. We even coaxed reluctant swimmer Rose the Irish Setter into the water. 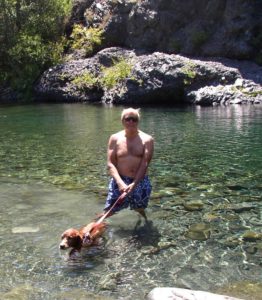 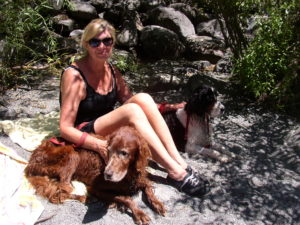 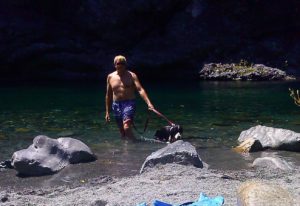 One of the most relaxing times I had at Panther Flats was when I waded out toward the rapids and sat on a rock and watched and listened as the water rushed past me. I started to consider that as someone who lives in the dry, hot desert, rivers and oceans might be an extra special treat. In any case, I felt very calm as I waded back to shore that day (all the trauma of the mountain roads was forgotten!).

We spent as much time as we could down by the river, and went to sleep each night lulled by the its soothing sounds. Being in a tent rather than a hotel room has its advantages.

Sometimes the rules or advice the Forest Service gives campers can seem a bit ridiculous. At this camp there was a sign warning us about Black Bears in the area. We were told to keep all food in our vehicles, not in our tent. Okay, I get that part. Bears have a remarkable sense of smell. But then the next instruction was to cover the cooler with something after you put it in the car because bears know what a cooler looks like and will try to break into the car and pop it open. Wow. Those bears are pretty smart I guess.

I pictured two Bears discovering a cooler in the back of our SUV.

“It’s a Coleman 54-quart cooler, Yogi. Gotta be meat in there!”
“Whatever it is, it’s better than the wild blackberries we’ve been eating lately. I am so sick of those, BooBoo.”
“I’m really hoping there’s hot dogs, and maybe some cookies! Let’s pop open the cover!”

It dawned on me as we entered the third week of our travels that I had never had more than a five-day vacation trip in the last two decades. I guess that’s the problem with owning your own business…you can’t leave for very long.

I grew up in the Midwest, where the sturdy work ethic was that you worked long hours in the fall, winter and spring, in the hopes of earning a long summer holiday. Some lucky souls even earned the coveted “month’s vacation”. I decided that I has certainly earned my month away from my business, probably a couple of years.

Travel and tent camping isn’t all glamour and excitement of course. There are mundane chores like laundry to attend to. Washing clothes by hand, in a bucket, is a tedious process. 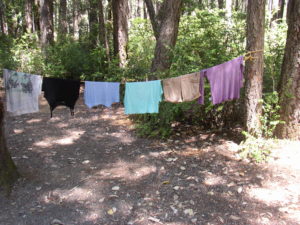 The last night in Panther Flats, we tried one of our “prepper meals”. These are freeze dried meals in pouches designed to last for years. People who are “doomsday preppers” stock up on these in case there is an interruption in the food supply. We bought some a few years ago at a conference on surviving disasters.

Anyway, we tried the sweet, spicy chili dinner, which was pretty good, though it had way too much salt in it. On the road it is nice to be able to make a meal quickly once in a while. One of the negatives of camping is the time spent getting three meals a day ready and washing all the dishes, pots and pans. Many of the places we camped did not have any restaurants close by.

One of the most adventurous dinners we tried to make was a pizza cooked over the wood fire. Every campsite we went to had a fire ring and a grill. The challenge with the pizza was building up the fire enough so it would cook the crust, but not so high that the whole dinner would be burned. We had to work at it for an hour or so, but the pizza turned out quite good. 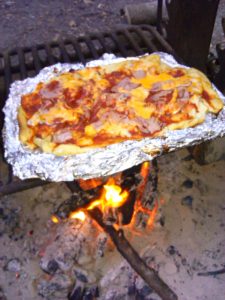 We took full advantage of the restaurants we encountered, however. By the end of the nearly 4-week journey, we had developed a bit of an addiction to Carl’s Jr. hamburgers. Those are really, really good tasting.

The beautiful scenery around the Smith River and the spectacular Redwood trees made this leg of our journey the most memorable so far. Now we were off to the beach in Oregon, which as it turned out, was even more fun.

bhanddp June 29, 2016 Hitting the Road Comments Off on The Majestic Redwoods! and a Refreshing River