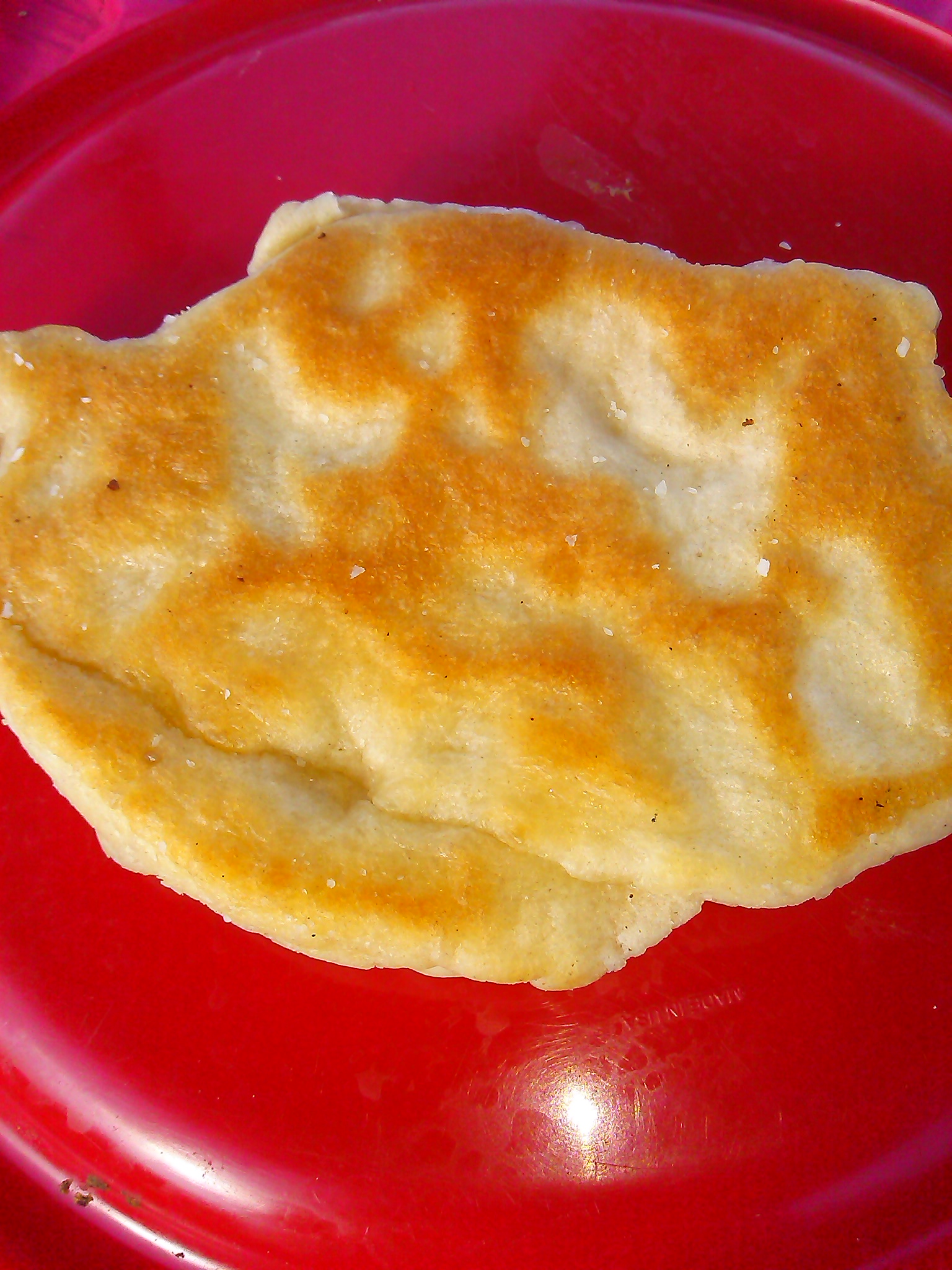 No. but I made something just as good, Even in a Dutch oven it’s difficult to bake bread, biscuits yes… bread no. When I was growing up I spent every summer with my grandparents in Overlook, PA. My grandmother baked her own bread every week. As a special treat she’d roll out some leftover dough, fry it, then slather it with butter, while the bread rose in the pan and then baked.

Here in the Southwest it’s called Indian fry bread. I know how to bake bread so I decided to give it a shot What could go wrong? Silly me.

It’s way different cooking outdoors then in your own kitchen. The first step for bread is to mix the yeast with a bit of sugar in warm water. That’s called proofing. I don’t know why it’s called proofing. Maybe to prove the yeast is alive? Now, in your kitchen you’d turn on the hot water, stick your finger in the flow and wait until the water was very warm. In the outdoors you have to heat the water. What I thought was warm ended up being scalding and killed all the little yeasties. Dead yeast do not rise.

So I start over. No problems. Add the foaming yeast to the flour and oil. One must knead the dough until elastic. I have no idea what elastic means. I knead it until it feels right, about 6 to 8 minutes. The problem with outdoor cooking is there’s no clean surface to knead the bread. Then it strikes me, roll out a sheet of aluminum foil and knead on that. Great. Except it starts to drizzle. And then to rain. Dough does not take kindly to extra moisture, so I move into the tent. Both Rose and Kate, our dogs are very interested in this dough.

The rain has caused the temperature to drop from a nice warm 75 degrees to about 55 degrees. Dough needs warmth to rise. It would have risen in 55 degrees but would have taken until the next morning to double in bulk. Being the enterprising sort I heated some water to a simmer and placed the dough In its bowl, over the water but not touching the water and wrapped it all up in a towel. Ann hour and a half later we have bread dough.

Now while the bread is rising I’m trying to get the fire going. It stopped raining, but the wood is wet. It’s a good thing the dough took extra long to rise, because it took that long to get the wood burnt down to hot coals. Of course, I burnt the first batch of dough, but I was expecting. The rest of the fry bread was nearly perfect.

Dee
Note to Self: Make a double batch next time. Reheated fry bread with cinnamon, butter and sugar is yummy for breakfast.

← The Good, The Bad, And the Ugly Cabela’s Somewhere in Sonoita →