When we went camping this week north of Payson, Arizona, we saw a sign on the camp bulletin board that we were in “Bear Country”. This confused us because we always thought Chicago, Illinois and surrounding areas were Bear Country, and here in Arizona was Cardinals Country. And in any case, being Green Bay Packers fans we’ve learned to not be too afraid of Da Bears; the Seahawks from the great Northwest have been far more troublesome in recent years.

After further investigation, we found out that the warning was referring to Ursus Americanus, or the American Black Bear.

The place where we camped this week was the first one that had a metal storage cabinet at each camp site with an unusual locking mechanism that evidently a bear can’t open with his or her big ol’ paw. 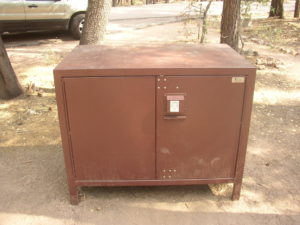 We were instructed to put all food in the cabinet overnight, and to dispose of all trash in the nearby dumpster. We are not even supposed to leave food locked in our vehicle. Apparently, Bears have been known to knock out car windows to get at food.

We learned that these Black Bears actually can be black, brown and cinnamon (reddish color). 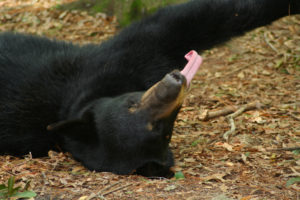 Compared to the much larger Grizzly Bears which have 4″ claws, Black Bears’ claws are only about 2″. I didn’t find that fact particularly comforting. I’d feel much safer if their claws were 1/8″ or less.

An interesting Bear avoidance tip was to not wear the clothes you cooked in to bed, and don’t keep them in your tent. These Black Bears have a sense of smell that is even keener than dogs’. This is an instance where cooking yummy camp food can work against you.

With all these bear-ish warnings fresh in my mind, in the middle of the first night we were camping, I woke up and remembered we had a package of chocolate chip cookies in our tent. My recollection of Yogi and BooBoo’s food preferences at Jellystone National Park was that they loved cookies and would go to great lengths to steal them. I pictured a couple of hungry Bears in our woods saying, “Let’s all head down to that tent at site A8. If they have chocolate chip cookies, and a campfire going, maybe we could have ‘smores, too.” I didn’t sleep too well that night. About 2AM I got up and decided it would have been best if I had eaten all the cookies.

But, we got through the night without any visits from Ursus Americanus, and remembered to put the cookies in the food storage locker the next night.

Other good advice we saw posted at the camp was about what to do if you encounter a Black Bear while you are hiking or when you return to camp.

Second: “Slowly Back Away From the Area” You betcha, probably all the way to Colorado.

Third: “Yell or Make Loud Noises to Warn the Bear of Your Presence.” Since it’s not that long until NFL Football season, I decided that I would yell, “Hey Mr. Bear, Jay Cutler Sucks”.

I pictured the Bear, shamed and humiliated, turning around and quickly retreating.

bhanddp June 5, 2016 Hitting the Road Comments Off on Dealing with Da Bears