Home » Bill’s Pizza in Prescott Az: Is it the best?

Bill’s Pizza in Prescott Az: Is it the best? 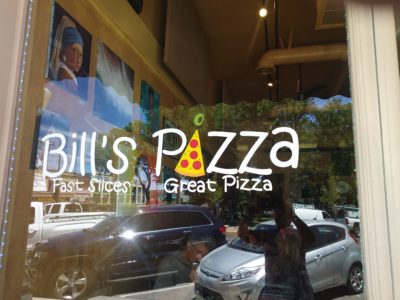 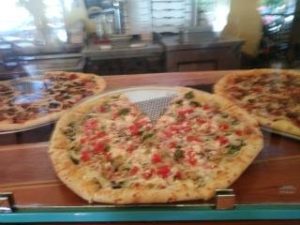 As you may know I love pizza. Just about any kind of pizza. Okay maybe not sushi pizza. So while we camped in Prescott AZ we tried Bill’s Pizza located around the court house square in Prescott. Bill’s Pizza is nothing but pizza, pizza, and more pizza. They do serve a few salads and desserts, but no pasta, calzones, or other Italian dishes to interfere with the pizza. Was it the best pizza I’ve ever had?

It’s the second best but the most creative and in a good way. Now usually we stay away from “pizza by the slice” because unless there’s a high turnover, the pizza crust gets soggy from the sauce leaking through, the cheese gets gummy, and the toppings over crisp as a result of being under heat lamps too long. Not so at Bill’s Pizza. We wanted to try more than one variety of pizza so instead of ordering a whole pizza we order four different slices.

Before I get into the pizza, you can order a 10″ individual pizza or a large 18″ with any toppings you want — they offer 41 different choices from artichoke hearts to zucchini (from A to Z get it). The décor is sort of Italian rustic. They do have a few outside tables on the sidewalk so Kate, our English springer spaniel could dine with us. She loves pizza as well. Not as much as Rose, our Irish setter did, but that’s another blog.

Now we come to the Kevin Bacon and yes, of course it has bacon, quite a bit of bacon actually. The bacon is paired with four cheeses, feta cheese — see I never would have thought of putting feta cheese on pizza — and mozzarella cheese. You might think that’s too much cheese, but it’s all mellowed out by spinach, tomatoes, and roasted garlic. The Kevin Bacon pizza had me dancing in the aisles, well actually the sidewalk.

The Blue Moon crumbles — what else — bleu cheese over sweet caramelized onin, mozzarella the garlix infused olive oil and the surprising crunch of toasted walnuts. I’m telling you this pizza put me over the moon.

If you ever get to Prescott, AZ you have GOT to try Bill’s Pizza.

Dee
Note to self. I wonder if it’s too far to drive from Payson to Prescott just for that pizza? I mean it’s only a 2 ½ hours away.

bhanddp June 10, 2019 Fabulous Fun Food,Hitting the Road Bill's pizza, prescott az Comments Off on Bill’s Pizza in Prescott Az: Is it the best?