Home » Up the California Coast Past Santa Barbara

Up the California Coast Past Santa Barbara

The next leg of our journey was a trip up the coast of California, past Los Angeles to a campground in the east of Santa Barbara, Upper Oso, in the Los Padres National Forest. The trip was way too long, about 8 hours on the road. The freeway slowed to a crawl through a significant portion of Los Angeles. I thought about the billions of hours of lost productivity for those souls who have to commute through this 5 days a week. I don’t think I could live there. It’s hard enough just to drive through LA once a year or so as we do. As someone used to the wide open spaces of Arizona, I had a hard time dealing with that feeling of being trapped in traffic, unable to move in any direction.

I was reminded of a conversation I had with a Hollywood literary agent one time. He got all huffy-puffy when I said I would never want to live in LA, until he finally admitted you didn’t have to live there to sell your screenplays to the film industry. I have no objection to flying there for a meeting anytime they are interested in writing me a check for one of my scripts. But living there, no way.

On this trip we also encountered numerous rude drivers who were skilled at cutting us off in traffic or honking at us when we refused to drive ten miles over the speed limit like they routinely do. I wondered if the rudeness was a product of the unpleasant traffic, or whether the unpleasant traffic was a product of the rudeness. In any case, that day I got a terrible headache from breathing the auto exhaust for 8 hours.

California is known as one of the most important food producing states in the U.S. and one of the unusual sights as we drove up was the number of fields of crops right next to the Interstate highway. I wouldn’t think that auto exhaust would be good for vegetables, but apparently they were thriving. California has been in the grip of a serious drought, which is apparent from the brown hills you see from the road. In fact, you can tell which areas are getting an allocation of water–the green, verdant fields–and which are not being watered, the brown, dusty looking areas.

The traffic didn’t really let up until we reached Ventura, quite a distance north of Los Angeles. This surprised me. I thought we’d be in the clear after we got past San Fernando. But our reward for the day’s driving was when we neared Santa Barbara on Highway 1 (the coastal highway). The sun was starting to set and the ocean was a gorgeous blue and shimmering with silver light on the waves.

We exited Highway 101 to our campground and again faced a harrowing journey up a mountain to the National Forest. This time, we were really tired from the long drive through Los Angeles. It felt really, really good to pull into Upper Oso campground. The scenery was beautiful, like a set for a Western movie or TV series in the ’60’s. Given the proximity to Los Angeles, maybe it was! 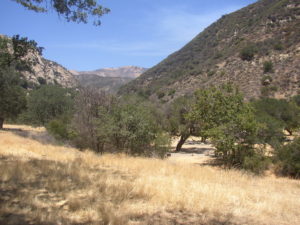 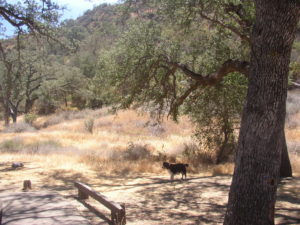 In a small valley below our camp, group of what looked to be at least four families arrived and commenced partying until late in the evening–a few of them became loud and profane (which was surprising given there were youngsters in the group)–not exactly what you want after a long day. We thought about complaining to the “Camp Host”, but were not sure it would do any good. The next morning we found out other campers complained about the noise and the camp host did indeed tell them to be quiet. Good job, Camp Host.

There seemed to be a general rule at most campground that groups should settle down for the night after 10PM or so.

We awoke at dawn and were treated to a beautiful sight, mist rolling in over the hills. It burned off quickly but I was able to capture it on camera. 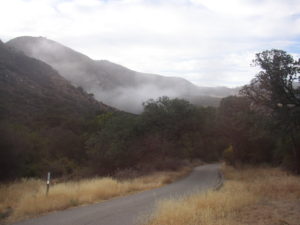 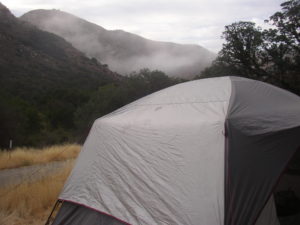 bhanddp June 21, 2016 Uncategorized Comments Off on Up the California Coast Past Santa Barbara