We extended our stay in Tillicum Beach by 5 days which meant we had to shuffle our schedule for the remainder of the trip in order to get back on time. This also meant changing our route back. We had planned to come back through Idaho, then Utah and then through northern Arizona. We decided to take a more direct route down I-5 to Los Angeles, then I-10 back to Phoenix. It was at least a three-day trip, maybe four, but we had no reservations at any campgrounds on that route. So, back to our trusty laundromat with Wi-Fi to look up where we could stay.

I found a campground right off I-5 in northern California, Sims Flat, for our first night back. The second night Dee booked us into an RV campground, Lost Hills RV Park, that had spaces for tent campers. The third night, in Blythe, California right on the Arizona border, we planned to set up our tent at a State Park campground along the Colorado River.

We woke up to a cloudy, damp morning at the beach. We were worried we’d be driving through fog on the Oregon coast to get down to the highway that hooked up with I-5 in Eugene, but it wasn’t too bad. It was again a treat to drive, this time east, through the verdant hills and across rushing rivers. What a beautiful state Oregon is!

I-5 was mostly an easy drive south, compared to all the winding mountain roads we had negotiated on the coastal drive up. The only drawback was the number of large freight trucks on the road, which meant we constantly had to change lanes and pass them, because they are restricted to a lower speed limit than automobiles. After 4 or 5 hours of that, it gets tiring. Surprisingly, at least to us, there were are few scary parts to the drive into northern California, as we approached the striking summit of Mt. Shasta. On the way, we crossed Shasta Lake, a very popular recreation area for boaters and campers.

Sims Flat turned out to be a little gem of a campground, with a modest 20 sites, all first come first served rather than reserved. We got there on a Thursday, so we had our pick of sites. The camp had been a part of history, serving as a sawmill in the early part of the 20th century. Historical artifacts included the place where the saw was housed, and a bridge that was still intact. 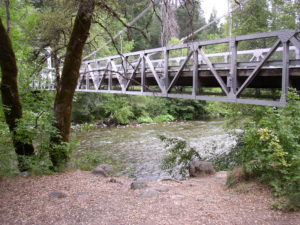 It was along the scenic Sacramento River.

The second night we were exhausted when we arrived at Lost Hills RV Park, north of Los Angeles. We had driven 8 hours and the moderate temperatures of Oregon and northern California started giving way to 90 degrees plus. Adding to the misery was the fact our SUVs air conditioning had gone out on the very first day of our trip. This wasn’t a factor along the cool coastline, but as we approached the inland deserts, we really could have used some cool air.

We were worried about our dogs Rose and Kate in the back seat. We found that if we wet down towels and put them on our dogs, they remained nice and cool. They snoozed most of the trip back to Phoenix, not bothered at all by the heat.

This was kind of a depressing journey because of the evidence of the terrible drought that has gripped California for several years. We saw entire fields of crops that had been left to brown out and die due to the water shortage. 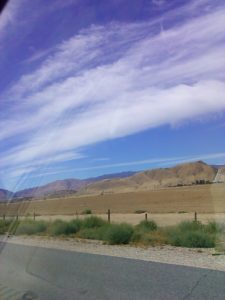 There were numerous signs offering farm or ranch acreage for sale. Some of the people were just giving up and leaving, it appeared. There were also numerous signs displaying the residents’ lamenting their current situation and their hopes that the politicians would get their act together and help them out so they could get back to their vital business of feeding America. Some of the signs read:

Is Growing Food a Waste of Water?

Very sad, and you can see why we seem to encounter higher prices for vegetables at the supermarket.

The positives about the Lost Hills RV park were the friendly staff, the small dog park they had where Rose and Kate could get some exercise before and after dinner, and the fabulous country-club like bathroom and shower facilities, which were very clean. After a shower and dinner we felt restored from the long drive. Dinner was a challenge because of the wind blowing that afternoon. It took forever for the water to boil for the simple rice and chili dinner we were trying to make.

It was odd sleeping in a tent at the RV park, which was located just off the highway and next to a truck stop. The soothing sounds of the Sacramento River from the previous night were replaced by the sounds of massive trucks arriving and leaving. The heat did not let up until well after dark.

Despite the heat and lack of water, some stubborn flowers were able to grow in at the edge of the camp. 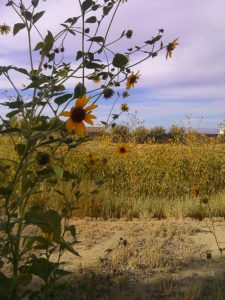 The third day home we had to go through Los Angeles, which as we saw on the outward journey can be a slow process when traffic is heavy. Luckily this was Saturday and the traffic was fairly light. One of the memorable sights on the trip as we entered the “desert” country was the enormous wind farm near Palm Springs. 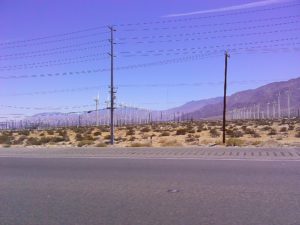 It got hotter and hotter as we approached Blythe, CA on Interstate 10. We saw our plans of camping that night by the Colorado River were out of the question. The tent would be unbearably hot. We took advantage of the free Wi-Fi at a McDonald’s at the Lovekin Exit in Blythe and found a dog-friendly Red Roof Inn just a few blocks away. It was a relief for all of us to step into that air conditioned room. The property also had a nice swimming pool in which to cool off. 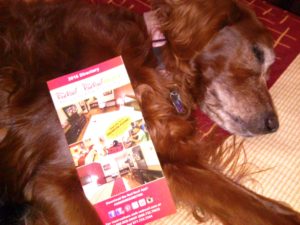 Rose says, thank you Red Roof Inn for getting me out of that heat!

One of the most brutal aspects of that leg of the trip was trying to unpack the rooftop carrier, which is made of black rubber. I thought I was going to have a heat stroke doing that. It was quite a shock to be back in that heat after the wonderfully cool temperatures in Oregon. We had to carry Rose and Kate from the car to the motel room because the parking lot surface was hot enough to burn their paws. It’s not easy to carry a big ‘ol Irish Setter.

The staff at the Red Roof Inn were very helpful. We had trouble getting the TV to work, so the manager on duty came to our room and re-booted it for us. It was a nice, no frills motel.

We all got a good night’s sleep and were ready for the hot, hot drive back to Phoenix the next morning on Interstate 10. We had planned the return trip intelligently in that each leg of the journey got shorter. We had just a 2 ½ hour drive to get home to Scottsdale. No problem at all after we had driven up to 8 hours on the first few legs of the trip home.

We make it a point to check the inflation of our tires on a regular basis. The wisdom of that was reinforced when we were driving back to Phoenix. The roadside was littered with pieces of rubber from tires that had blown, both auto and truck. I’ve heard that both over-inflation and under-inflation are bad for tires. I certainly would not have enjoyed changing a tire on that blisteringly hot day.

I was very grateful that over this 3000+ mile journey, we had no car trouble whatsoever. We encountered a lot of mountain roads on the way up and back. Our trusty Ford SUV was the MVP of our trip, I think.

It was 112 degrees in Phoenix when we arrived. After spending time at the cool beaches of Oregon, we were reminded that perhaps human beings are not meant to live in 112 degrees.

Time to plan the next trip to a cool forest, lake or beach!

bhanddp July 10, 2016 Hitting the Road Comments Off on The Long, Winding Road Home

← Look For It Flowers or Weeds? You decide. →