In search of relief from the brutal summer heat in Phoenix, we spent 5 days at a campground near Flagstaff, Arizona, surrounded by Ponderosa pine trees. The campground was cleverly called Pine Grove. This was a kind of homecoming for me because when I was a boy we owned a home not far from where we camped. I used to go fishing at Lake Mary, which is close to the camp.

Coming up the I-17 freeway from Phoenix, it seemed as though the desert would never let go of us. The scenery was hot and brown, with scrubby little bushes being the tallest vegetation. Then almost instantly we saw the beautiful pine trees and everything around us turned green.

We stopped at the place where I lived as a boy, Munds Park, to refill our gas tank. There were dark clouds in the area and while I was filling the tank; they blew a really loud air horn on the nearby golf course, warning the golfers to take shelter. The guy at the adjacent pump, a tourist from Texas, jumped about three feet in the air when he heard the horn blast. He looked as though he feared it was a terrorist attack. We are all so on edge these days. Probably for good reason.

I told him not to worry, explaining that some golfers are just too dumb to stop playing when there is thunder in the area. I don’t recall that horn sounding when I was a kid and played there (and was junior club champion one year). Back then they relied on most of us having common sense.

As we neared the exit to the camp we ran into a drenching thunderstorm. Visibility was very low and I worried about getting in an accident with the big trucks and motor homes on the road. In Arizona, drivers aren’t used to the rain. Half of them seem to slow down to a crawl and the other half speed up. It makes for harrowing lane changes and exits from the freeways.

We were also concerned about setting up a tent in the rain and wind. We had never done that before. Luckily, the rain let up just as we got to Pine Grove. We were greeted by the wonderful scent of pine trees after the rain. Everything smelled fresh and clean.

It turned out that the clouds rolled in every afternoon we were there. The second day we enjoyed a gentle rain pitter-pattering on our tent roof. Great weather for taking a nap. So I did. 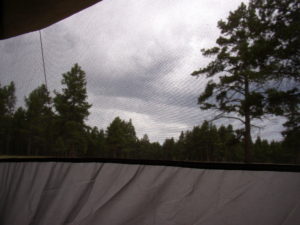 We arrived on a Monday and were surprised how many camp sites were occupied. We found a great spot, though, in a beautiful meadow. One of my projects this year is to finish a Western screenplay I’ve been working on for some time. I was struggling with how to open the story. Then, as I sat in the meadow around sunset I saw in my mind’s eye that the meadow was the place I was looking for all these months. Strange, isn’t it–but that’s how creativity works for writers. Makes me wonder how my story would have opened if we had never gone to that campground… 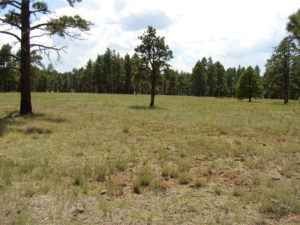 As we were making dinner that evening, more and more campers with motor homes and trailers rolled in, until the camp was nearly full. Some of the larger ones are quite expensive, as I learned when I attended an RV show in Phoenix. Just as with homeowners who are “house proud” and try to keep their properties immaculate, some of the RV owners were the same way. At 6AM one morning I saw a neighboring camper already up on a ladder washing the windows on her immense motor home. I guess if I spent $100K on an RV, I would too.

Some of the larger motor homes and Fifth Wheels have animal names like “Bighorn”, “Raptor” and “Bison”. Given the size of some of these, it might be more appropriate to call them “Behemoth”, or “Megalodon”. I’d actually be afraid to drive some of these on the highway.

This campground had clean, tiled showers with warm water. The bathrooms were always spotless. A nice surprise was that ice was only $3 per bag and the friendly camp host brought it to our tent. I’ve stayed in hotels that didn’t have room service that good.

One of the things I really like about camping is meeting the neighboring campers. Most everyone is cordial; some are eager to swap stories about their camping adventures. It’s funny that when I tell people I’m a writer they often get really animated and ask me questions about what I write and what a writer’s life is like. In my previous career, if I told them I was a management consultant, they would usually either flee or point out the wreath of garlic on around their neck. (By the way, garlic doesn’t work that well; the only way to get rid of a consultant is a stake through the heart. But even a dead consultant can send an invoice, by the way).

I’ve pointed out in other blogs some of the odd and even silly rules you find posted at campgrounds. At this one, the most curious regulation was “Don’t wash pets in the bathroom sink.” I pictured myself trying to lift Rose my Irish Setter into the sink. Her reaction would be “Are you serious, boy?” 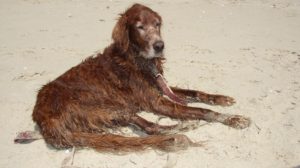 Unless the campers there tend to bring their pet hampsters or turtles with them, that rule seemed a bit unnecessary.

The meadow by our tent was dotted with unusual rocks of all different sizes, evidence of Volcanism in Arizona’s distant past. By this I mean volcanic activity, not a visit from Mr. Spock. He would be coming from the future, of course, not the distant past.

The afternoon before we left, a big, loud thunderstorm rolled in. We took shelter in our tent when the rain started coming down. But then we wondered, “Are we safe in a tent during a storm with thunder and lightning?”

Turns out, the weather–and camping–experts say you’re not. They advise to take shelter in a hard-topped vehicle or a substantial building that has plumbing, which acts as a ground to the lightning. RVs are safe, too, if you keep the windows shut during the storm. Our Springer Spaniel Kate seemed to know this instinctively. When we heard a big CRACK of thunder, she bolted from our tent toward our SUV. We all followed her and got in the vehicle.

I was concerned about lightning hitting the tall pine tree next to our tent and then jumping across to our tent. I already knew you didn’t want to be in a tent in a wide open area. Here, there were many other campers near us. In this area, the storms blow over quickly. I learned that people often get struck by lightning because they leave their shelters too soon, thinking the storm has cleared out when in fact it hasn’t. Experts say to listen for lingering sounds of thunder in the area.

But soon the storm was over and we were back sitting outside in the now cool evening air. 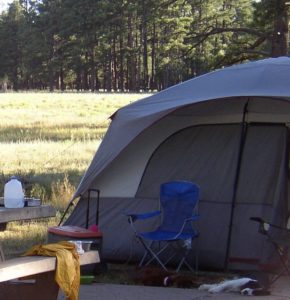 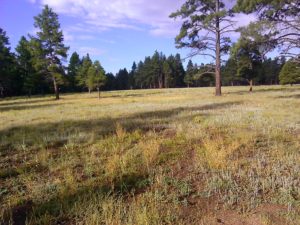 bhanddp August 2, 2016 Hitting the Road Comments Off on Summer Rain Showers in a Beautiful Pine Forest

← Tiny But Tough Our Visit to the Amazing Grand Canyon →