First of all I’d never been to the Chiricahau National Monument. I wasn’t even sure what it was. Was I in for a surprise. The monument and campground are located about 45 minutes from Wilcox the nearest town. Wilcox is closer to the New Mexico border than it is to Tucson. The drive is uneventful. No cliffs, no winding road, no dangerous curves. Pretty straightforward. Almost boring. Until we get a glimpse of the rock formations. 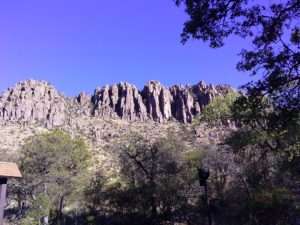 But first a lesson in geology. Arizona is riddled with volcanoes and its past has seen lots of seismic activity. The Chiricahau monument was formed by a volcanic explosion about 25 million years ago. Actually I should say implosion because instead of that iconic cone shape we all think of when we think of volcanoes, this formed a caldera or crater five miles wide.

The ash built up on the sides of the caldera and eventually hardened into rocks. Wind and rain sculpted the fantastical rock formations. You see pinnacles, sheer cliff faces, balanced rocks, and weird shapes. The balanced rocks aren’t rocks that have toppled on each other, although you will see a fallen boulder here and there that landed on top of other rocks. Most of the balanced rocks are that way because the softer rocks were whittled away by erosion leaving the harder rocks on top of each other. 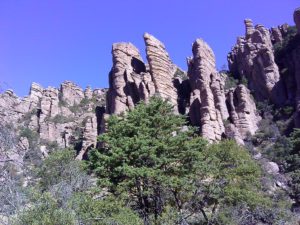 One can drive up to the top Massai point and down or take a shuttle, provided by the visitor’s center, to the top and hike down. It’s well worth the effort. Early morning just after sunrise is the best time, the shadows accentuate the rock formations and bath the rocks in gold.

Dee
Note to Self:

bhanddp May 18, 2017 Hitting the Road Comments Off on Stunning Chiricahau National Monument

← Review of Bonita Campground at the Chiricahua National Monument, Coronado National Forest Expect the Unexpected Should Be the Golden Rule of Camping →