One of our favorite spots to go camping in Arizona is Roosevelt Lake in the Tonto National Forest, east and north of Scottsdale. We stay at Cholla Campground, which has spacious and plentiful campsites, nice bathrooms and solar heated showers. This time we were there during the period when the moon appeared extra large around the 14th of November. It was amazing how bright our lakeside campsite was at night. 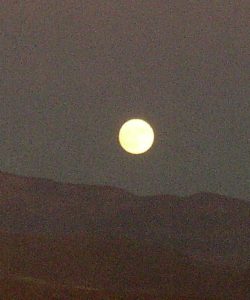 The lake is surrounded by low, rounded mountains which cast copper colored shadows on the water in late afternoon. The mountains are studded with saguaro cactus, which on the opposite side of the lake from our camp resembled whiskers on sleeping, portly giants. In the early morning, the lake was a brilliant, deep blue. Its color was so intense it almost didn’t look real. 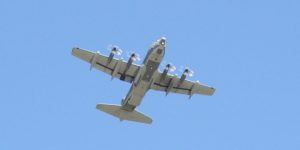 One of the unusual sights there were vintage aircraft flying overhead every once in a while. We thought these might be tourist excursions. 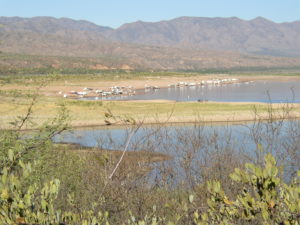 One of the things I have most enjoyed about camping is the wide range of characters you meet at the campgrounds. We have been camping in the Western U.S. We’ve met “grizzled Westerner” looking characters. Like out of a cowboy movie. And the “full timers”, generally older couples who live in their RV most or all of the year and travel around the country enjoying their freedom from home maintenance and mowing lawns. These folks love to discuss their experiences and can be terrific sources of information about where to camp and about camping equipment, including which RVs or travel trailers are the best value.

If you are at the same campground with the same people for a week or so, it almost develops a neighborhood feeling. You stop and chat when you are on the way to the water well, for example. We have exchanged business cards with a number of people we have met.

In our travels we have also had lovely young surfer girls as camp neighbors, complete with surfboards strapped to the top of their SUV. You also see newlyweds, who often arrive in a small sedan rather than an RV, and for some reason spend a lot of time in their tent…

Family groups are prevalent during the summer but mostly disappear by September. As the campgrounds thin out in the fall, it’s a much more peaceful experience, we have found. In general, people are extremely nice at the campgrounds. But this time at Roosevelt Lake we encountered a type of person we hadn’t seen before: The Grumpy Old Fart. He was indeed old, with a grey beard, and wore an apparently permanent fierce scowl on his face.

When we arrived with our dogs Rose and Kate at Roosevelt Lake we found an ideal campsite right on the lake. He was parked next door in a beat up old RV. When we got out and surveyed our site, he came rushing over and yelled, “Do you have to camp here!!!???” “There are other sites. I DON’T WANNA LISTEN TO TWO DOGS BARKING!!!” Then he made this dismissive gesture like we should get out of there right away.

We were so surprised at this, we had to pause for a minute. I was thinking, “Unless your name is Tonto National, bub, this Forest doesn’t belong to you.” It is really rude and obnoxious to chase other campers away just so you can have the place to yourself. But as angry as people are these days, we didn’t want to get in a big argument that might escalate so we just left and went to another part of the campground. We noticed that the nice site we had chosen had some great firewood there, left by the previous campers. We made a note to go back and retrieve it after we set up camp at our new site.

Then when we returned for the wood, we saw that the Grumpy Old Fart had taken the wood and put it in his camp, apparently just to spite us.

He should have welcomed our dogs Rose and Kate–who hardly ever bark–rather than chasing us away. 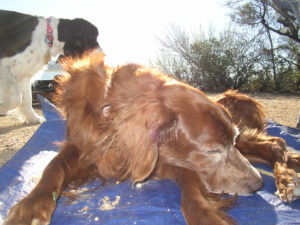 He could have met celebrity dog authors. Rose and Kate have written their own book about their adventures, available on Amazon.com, “Rose and Kate Unleashed.” And the next day a family with three loud little kids took the site next to him. I thinks that’s called karma. 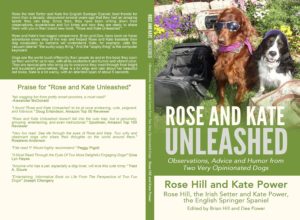 A few days later he departed. When we went for a walk we saw that Grumpy Old Fart had never used the wood at his campsite. He just took it so we couldn’t have it. Good grief, how petty.

But, we reflected that we have probably met 200 people in our camping travels, and this was the only truly rude person (except for some rude drivers on the California highways of course). So I would have to say that folks who go camping are nicer than average, overall. Maybe the serenity of the outdoors calms people down. I certainly feel calmer after a few days in the great outdoors.

bhanddp November 19, 2016 Hitting the Road Comments Off on Spectacular Moonlight at Roosevelt Lake–And Some of the Unusual Characters We’ve Met

← It Takes All Kinds “Winter Camp” in the Desert →