Home » Our Visit to the Amazing Grand Canyon

Our Visit to the Amazing Grand Canyon

Choose whatever superlatives you want, but the Grand Canyon’s beauty exceeds your ability to describe it. That’s why this blog will have more pictures than usual–in this case they tell a better story than words.

We were camping near Flagstaff, Arizona and noticed we were not too far from Grand Canyon National Park, perhaps just two hours or so away. We couldn’t miss an opportunity to see one of the wonders of the Great American West, so one morning we got up early and drove north and west until we reached the park entrance. 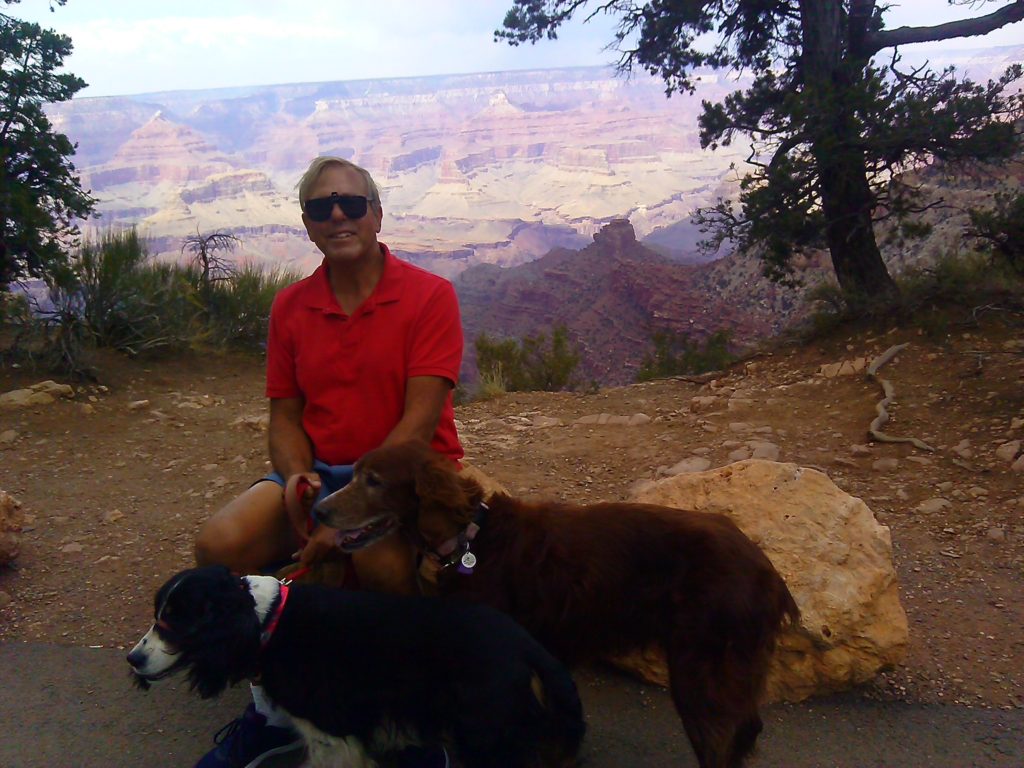 We parked and found the trail to the canyon rim. Dogs are allowed on the trail, by the way. 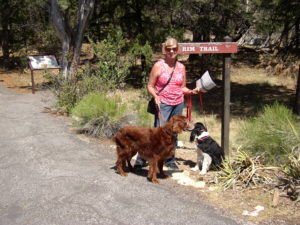 Being a little bit apprehensive (scared to death) of heights, I tried to avoid getting too close to the rim’s edge. It didn’t stop other people, though. Some even climbed out to rock outcroppings to take the perfect “selfie”. There have been instances when people attempting stunts like that have lost their footing and plunged to the bottom of the canyon, to their death.

Dee wanted to take a picture from the canyon edge, but she was careful to lie down so she couldn’t lose her footing. 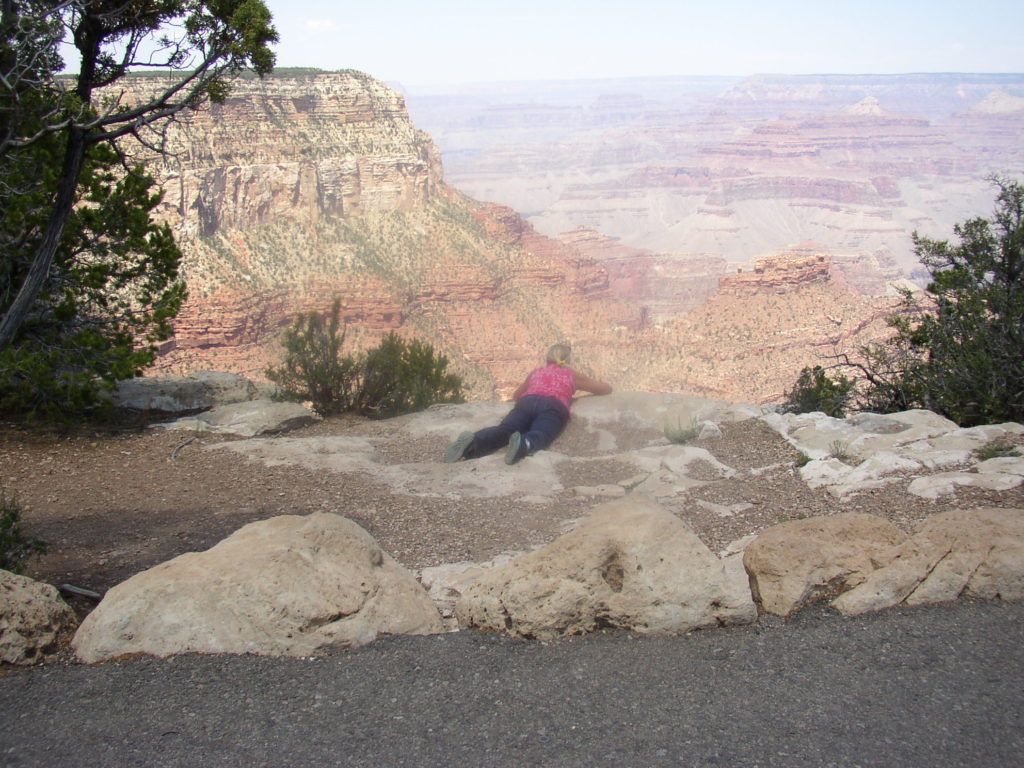 Besides the size and scope of the Grand Canyon, the colors on the canyon walls are also amazing. 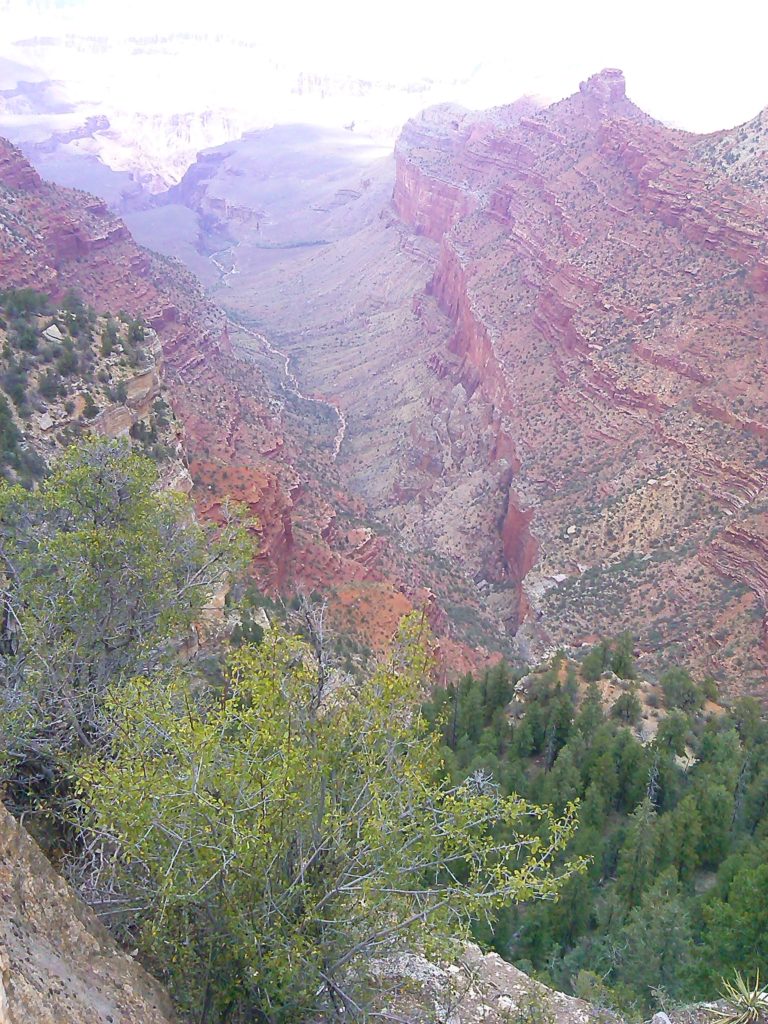 We were there on a Thursday in mid-summer, the height of the tourist season. The park was very crowded even though we arrived there at 10:30 in the morning. Parking spaces near the “Rim” were hard to come by. But you can park further away and take a shuttle bus in.

International visitors were quite numerous. It was fun to hear all the different accents. Germany, in particular, was well-represented the day we were there.

We were only there for one-half day, but could have spent three days or more and never get bored. There are fascinating indoor exhibits about the geologic history of the canyon and how it was formed.

The rock strata at the bottom of the canyon are more than 1.6 billion years old. Along the rim trail they have placed small exhibits of the rocks found in the canyon along with their description. You can even touch them. It’s truly a journey through time. 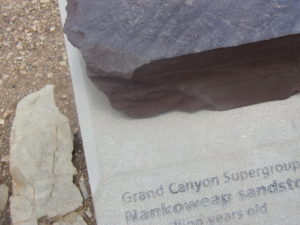 Even if you don’t have a particular interest in geology when you arrive at the canyon, you will by the time you depart.

As the day progresses, the light and colors change in the canyon making for endless photo opportunities. 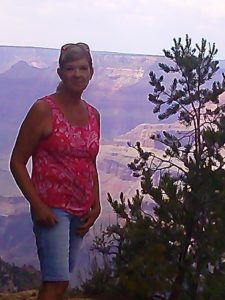 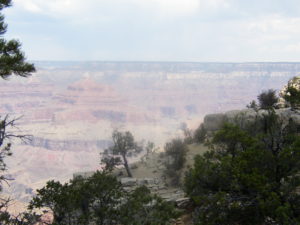 You even encounter wildlife: in this case a young elk grazing on the side of the road, blissfully unaware of all the people and cars around him. 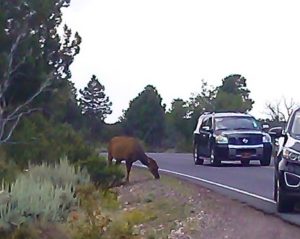 I think we’d like to re-visit the canyon later in the fall, when the crowds thin out. When you find yourself alone on the trail, it is a remarkably experience to sit on a bench and let your gaze wander along the expanse of the canyon. No matter how long you sit there, you never cease to be amazed. 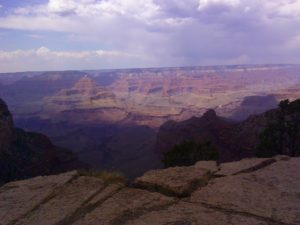 bhanddp August 3, 2016 Hitting the Road Comments Off on Our Visit to the Amazing Grand Canyon

← Summer Rain Showers in a Beautiful Pine Forest Time for a Tune? →