Home » Jabbering Jays and a Cacophony of Crows

Jabbering Jays and a Cacophony of Crows 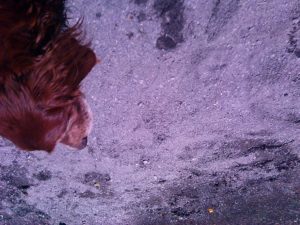 Whether you live in a city or a suburb, you listen to the buzz of traffic, hum of air conditioning, and just general manmade noise. Occasionally you hear a bird. I never realized how vocal birds are. At Upper Oso (Santa Barbara, CA) a family (bevy? clutch? clan?) of crows would start calling right before sunrise… we’re talking 5:45 AM. Here at Panther Flats (Crescent City, CA), blue jays start jabbering right after sunrise. Certainly gets you going in the morning! 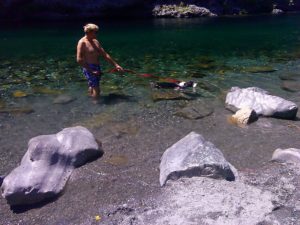 Evenings are quiet – ok there was that one big family that fiesta-ed (is that a word?) until the camp host came and told them to tone it down, but that’s the exception. Other than that it’s quiet. The campsites are tucked into the shrubbery and trees so it’s rather private too.

The Smith river runs adjacent to the campsite. It’s not a big river by any means, at least not here. A skinny waterfall plunges about 100 feet from a hidden spring in the face of the cliff. Mild rapids scattered here and there add to the rushing water. The sound of the river adds to the soothing atmosphere of the camp — except for the birds of course. 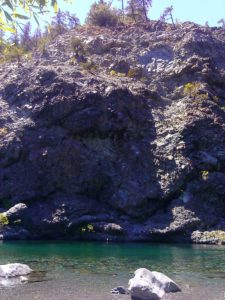 A tiny, and I do mean tiny, sandy beach takes on an international flair when a German woman joins the Hispanic family, us, and three Japanese men sharing the beach. 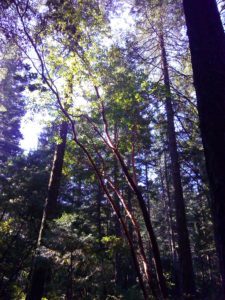 Next to the cliff the water was about 20 feet deep. Several devil-may-care, or maybe I should say had-too-much-beer, guys started diving from 12 feet up the cliff. With no phone service how does one dial 911?

Dee
Note to self: Find out how to add music to the blog.

bhanddp June 28, 2016 Hitting the Road Comments Off on Jabbering Jays and a Cacophony of Crows