Home » Gorgeous Wildflowers and a Hint of Autumn’s Arrival

Gorgeous Wildflowers and a Hint of Autumn’s Arrival

We spent four days last week at the beautiful Canyon Point campground, which is north and east of Payson, Arizona. The trip there from Payson involves a rapid ascent to more than 7,000 feet above sea level. It’s a little hard to catch your breath when you first get there and set up camp. We have driven up there before to visit the nearby lakes, Willow Springs and Woods Canyon.

We remembered the drive up as being somewhat scary along the mountain rim just before you get to the top. Because we have acquired so much experience on mountain roads on other camping trips this summer, the drive up here now seemed like an easy, fun route. Nothing scary at all.

We noticed the same effect after driving on the freeways in Los Angeles. When we got back to Phoenix, our freeways seemed almost empty in comparison. I still don’t think I could survive living in Los Angeles, though. 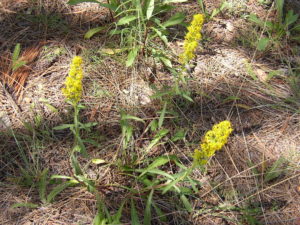 When we arrived at Canyon Point, we noticed right away that they have had lots of summer rain in the area. The meadows were a sea of colorful wildflowers. I’ve never seen so many wildflowers, actually. I felt like treading carefully when hiking there so I wouldn’t crush any of the little flowers.

Overall, this was a wonderful experience. The campground is laid out very well, with spacious campsites and lots of privacy courtesy of the Ponderosa pine trees. 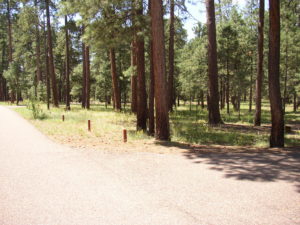 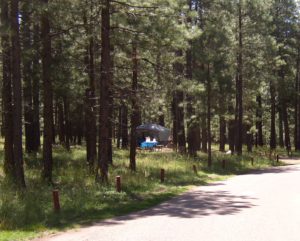 Because we went early in the week, the weekend campers had already left so we were pretty much by ourselves in the great outdoors.

We noticed a significant difference from the time we camped in this part of Arizona in June–the weather was cooler and cloudier, with thunderstorms appearing nearly every day. The last night we were there, the thunder and lightning arrived at 2AM and kept going until sunup. It was a little scary to be sleeping in a tent with the storm raging around us. We debated whether to escape the tent and take shelter in our SUV, which is conveniently named a Ford Escape. But then we would have been soaked and cold, so we stayed under the warm blankets. For added warmth, we had Rose our Irish Setter and Kate our Springer Spaniel. Surprisingly, the noise from the thunder and lightning didn’t seem to bother them that much. 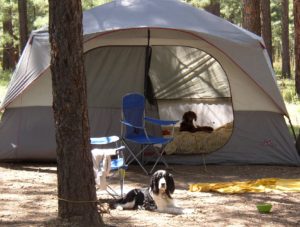 When the rain let up and we came outside, we discovered we had made a Rookie Camper mistake: we left the matches on the picnic table when we went to sleep the night before. They were ruined of course, so we didn’t have any coffee or tea to warm us up on the cool, damp morning.

We also noticed that the days are becoming noticeably shorter. We had to hustle to cook dinner, eat and do the dishes before nightfall. One thing we need to work on if we continue to camp in the fall and winter months is better lighting in our tent. It’s fun to read at night after dinner, but the lanterns we have now are not adequate to see the pages of the book very well.

When we went for a walk one morning, we met a couple who were veteran campers. One of the nice things about camping is that you meet people who are eager to share tips about camping equipment, trailers, and the best places to camp. This couple even gave us brochures for several campgrounds they really liked. They gave us a tour of their Jayco trailer, which was a really nice, functional yet not to large or heavy one. It had lots of features that provided the comforts of home. We are going to buy a trailer in the next few months. Tent camping has been fun but it would be nice to just get up and go rather than having to take down the tent each time and stow all the gear in the overhead carrier on our SUV.

At Canyon Point, the campground description says they have flush toilets and showers, which is technically true because they have a large building near the entrance with the showers and toilets. The campground is huge, though, so it is quite a hike from the far end of the camp to use the restrooms. When nature calls, it’s often on the emergency line, and you don’t have time to hoof it a mile down the road to the flush toilets.

Dotted along the camp roads are the infamous “vault toilet” facilities, in other words a pit in the ground. We noticed right away that the vault toilet near our campsite smelled really, really bad. It made you gag when you stepped in it, and you were greeted by flies–yuck! I started calling it the “Little Shack of Horrors”. I would recommend that they maintain those “shacks” a little better. It detracted somewhat from the camp experience. 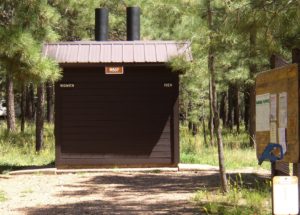 Enough about that crap, so to speak. Back to the positives at Canyon Point. The shower rooms were very clean and the showers were free, with nice warm water! At some campgrounds they charge up to $6 per 5 minute shower. That’s $72 per hour!

The rain and cool weather was actually a blessing because we saw that we need to figure out how to warm up our tent so we can keep camping in the fall. We found a possible solution on the Internet, using a flower pot and small candles. Sounds weird but it appears to work. We’ll have to give it a try.
http://patriotcaller.com/the-30-cents-a-day-space-heater-video-2/3/

Interacting with the Local Wildlife

One species that has carved a nifty niche for itself in campgrounds is the raven. They almost seem to be watching your campsite, waiting for you to leave, so they can come down and look for food to steal. They even tried to peck through a thick plastic jar of dog food we carry. They kind of strut as they walk along, very confident it seems to me. Just like Poe wrote, “In there stepped a stately Raven of the saintly days of yore.” Stately is a great word to describe how they walk in to the campsite.

A more pesky creature at this camp was the Abert’s squirrel, which loves its habitat in the Ponderosa pine forests. It tries to sneak into your camp and make off with any food it can scavenge. Our Springer Spaniel desperately wanted to chase them, and they almost seemed like they were teasing her, since she was on a tether and couldn’t reach them. 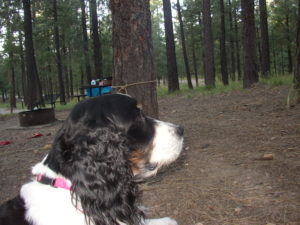 One afternoon we were eating peanuts in the tent and one of these little devils tries to scratch and push his way through the fabric and get to the tasty nuts. I was sitting next to the tent wall and saw his angry face through the fabric.
We dubbed the creature SquirrelZilla.

Rose is Lucky to Escape Injury

The weather on this trip was quite a mix of things: lovely sunshine, and also win, rain, hail and cold. The storms seemed to rush in from all directions. One scary moment was after a storm cleared out and we were all sitting outside the tent. A heavy branch from one of the tall Ponderosa pine trees had been weakened by the wind and rain, snapped off and fell to the ground–just a few feet from Rose our Irish Setter. She got up with a very startled look on her face. We were so grateful the branch did not fall on her. I guess sometimes we need a reminder that we are out in the wilderness.

One stormy afternoon I sat in the tent and read a wonderfully scary novel by the great Peter Straub, titled, “If You Could See Me Know.” The story and the weather combined for an eerie experience, but a very pleasurable afternoon. I had the fascinating experience of interviewing Peter for our book, “The Making of a Bestseller.” I always get a kick out of interviewing people who have achieved great success, no matter what the field of endeavor. He provided lots of insights about how he approaches his work.

I got a lot of writing done myself on this trip. I opened the tent flap, and had this amazing view of the National Forest while I worked. Much better than staring at the wall in my home office.

bhanddp September 4, 2016 Hitting the Road Comments Off on Gorgeous Wildflowers and a Hint of Autumn’s Arrival

← Furry and Feathered Friends Find what you need when you need it. →