Home » From High to Low

From High to Low 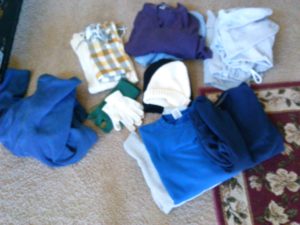 Packing for this trip means packing for a highs of 95 degrees and lows of freezing. Yes, you read that right freezing, even though it’s June and we will be traveling until mid-July. Three campgrounds right now report lows in the high 30’s and Yellowstone reports freezing, as in ice forming, as in possible snow flurries. The woman who took our reservation was so cheery when she said, “you know we get snow in July, just so you can be prepared.” Snow, the white stuff. So while Arizona sweats out 110+ degree temperatures we’re preparing for snow.

We packed a separate bag with cold weather clothing. Hopefully we won’t have to use it. BTW anybody have a couple of kid’s sweatshirts that would fit an Irish setter and an English springer spaniel?

Dee Power June 13, 2016 Hitting the Road Comments Off on From High to Low

← Making Progress And we’re off. →