Home » Brine It On: The Turkey That Is

Brine It On: The Turkey That Is 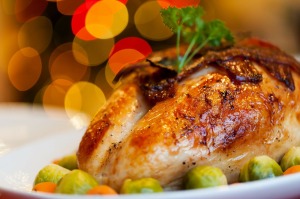 You’ve probably eaten turkey that’s dried out and chewy rather than moist and tender. Well that won’t happen to your roast turkey if you brine the turkey for 24 hours before roasting. What’s brining? It’s simply giving the bird a nice soak in salty water.

The formula that seems to work best is one cup of salt, one cup of brown sugar to one gallon of water. Bring to a boil so the salt and sugar completely dissolve. Then cool to room temperature. Refrigerate until the brine is ice cold. If you’re in a hurry, use three quarts of water rather than a gallon. When the brine has cooled to room temperature add enough ice to make a gallon.

Amp up the flavor by adding extra spices and seasonings to the brine. For example for a Southwest flair add lime slices, coriander seeds, cumin, oregano and hot peppers. A turkey that talks Italian rests in brine spiked with garlic, onions, basil, fennel seeds and orange slices. A classic combo includes sage, parsley, celery seeds, onions and a hit of lemon. Remember you’re not going to use the brine as the basis for a sauce, as you might a marinade, so don’t be shy about the seasonings. The flavors are diluted by the water. Save some of the seasonings to rub on the turkey before it roasts.

I don’t roast a whole turkey. I mean it’s impressive and all to carry the shiny brown bird to the table and listen to the oohs and ahs. However, it’s a pain to try to carve that bird while everyone watches. One year the turkey leg I was hacking off stayed on the carving board, while the rest of the bird went flying down the table knocking over the mashed potatoes. Not a pretty site.

Instead I split the raw turkey in half and remove the backbone and wings. Don’t bother brining those. Roast them the day before to make a lovely turkey gravy. You now have two halves which are easier to manage. I go a step further and cut off the thighs and drumsticks from the breast.

Place the turkey, or turkey parts, in a food storage bag and add the brine. Keep refrigerated for 24 hours. Remove from the brine one hour before you plan on starting the roast so the turkey reaches room temperature. Rinse the turkey and pat dry. Add any rubs or seasonings. This sounds a little gross but instead of putting those seasonings on the skin of the turkey, put them underneath the skin. Slip your fingers — gloved if you must– between the skin and the meat. Pat the seasonings directly on the meat. Add fresh herbs if you like and thinly sliced citrus slices the same way.

Brian usually smokes both drumsticks and one half of the breast. I roast the other half and both thighs.

About that gravy. Roast the backbone and wings until dark golden brown. Don’t worry about the meat drying out. Remove after about 45 minutes in a 375 degree oven. Place in a pot large enough for the pieces, a gallon of water and aromatic vegetables. Deglaze the roasting pan with some of the water, scrapping those tasty brown bits up. The golden brown skin gives the gravy a rich deep color. Add the to the big pot and bring the turkey and water mixture to a boil with vegetables such as carrots, celery and onions. Simmer for at least an hour. Toss in some sage leaves and increase the heat to medium high. Let it reduce by half. Strain to remove all the turkey, bones, skin and veggies. You now have a concentrated broth to use as the basis for gravy. Beats the canned stuff any day of the week, never mind Thanksgiving day.

Dee Power November 24, 2014 Fabulous Fun Food Comments Off on Brine It On: The Turkey That Is