Home » No Refrigerator Day One

No Refrigerator Day One 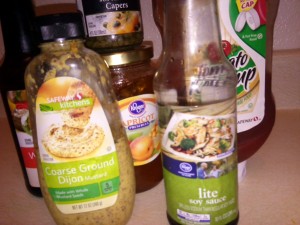 The refrigerator is empty. The freezer is empty and the appliance has been turned off so we’re not tempted to use it “just this once.” It’s a shock to see how many times I’ve opened the door even though I know it’s off.

We have a small cooler. One that we use to transport food for a picnic or to get it from our house up to the cabins in the mountains. It doesn’t have an airtight lid, but it will have to do for this experiment.

Disclosure Time
If this was a TV commercial for a pharmaceutical drug then the music would cue up nearly as loud as the melodic announcer’s voice while people engage in quiet conversation, couples cuddle or take a stroll across a beautiful meadow. The soothing voice tells you the side effects of this particular drug include death, insanity, suicidal tendencies and erections that last more than four hours — not a good thing by the way. You, of course, tune out the dire warnings because you’re listening to the music and watching that perfect family have a picnic.

So can living without a refrigerator cause death? Yes. Botulism, while rare, can cause paralysis of the lungs and heart. Salmonella is more common and is a food-borne illness. The USDA recommends that food should be kept between 32 to 40 degrees Fahrenheit. Our little cooler can do that if we don’t open it more than a couple times a day, keep it fully packed and don’t put room-temperature food in it.

It’s amazing what doesn’t have to be refrigerated but is. Take ketchup, the bottle says keep refrigerated after opening but how many times have you seen bottles of ketchup on the table at a restaurant? That goes for mustard, soy sauce, barbecue sauce, pickles, olives, and a bunch of other stuff.

Butter doesn’t have to be refrigerated either if you use it within a few days. Eggs are iffy. Theoretically they’ll keep at room temperature for a day or three but I don’t feel comfortable doing that.

Produce doesn’t need to be kept cold at all unless you’ve cut it up. It does need moisture. Some fruits and vegetables, such as bananas, tomatoes and strawberries start to lose flavor in the fridge.

So I’ve stocked the cooler with 1/2 dozen eggs — yes you can still buy eggs in six-packs — mayonnaise, salad dressing — because I didn’t want to throw it away — salsa, double-bagged frozen chicken, homemade dog food which in our house is equivalent to people food, a couple bags of frozen vegetables and a bag of ice.

I also put ice in a small insulated jug with water so we’d have something cold to drink without opening the cooler.

67 Replies to “No Refrigerator Day One”