Home » Javelinas stink — well they do.

Javelinas stink — well they do. 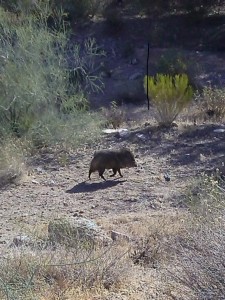 Javelinas in the desert

We were taking our morning constitutional with Rose and Kate, our dogs. This time of year it gets hot very quickly in the morning so we try to get out before 7:00 AM. As we were walking Rose stopped and went into hunting mode. Her tail went straight back instead of up. She lowered her head and stared off into the desert. That’s when the odor hit us.

There’s nothing like the musky odor of javelinas. It’s a cross between skunk and marigold flowers. Rank to say the least. Javelinas look like wild pigs with tusks. They weigh about 40 pounds. They’re not afraid of people. This photo was taken across the street from a condominium complex.

This time there were six or seven of them in the wash. It’s

Dee Power June 23, 2014 Out and About Comments Off on Javelinas stink — well they do.

← A Tamale Disaster Dried Veggies in the Desert →